Be Careful How You Treat People

*Warning: There is discussion of rape and murder in this post that some people may find offensive. Please read with caution. All photos are from Google images.*

I want to talk about something that actually scares me: the real monsters of this world.

One of my favorite subjects to discuss is serial killers. They fascinate so many people for lots of reasons but the main one is because for those of us who’s brain’s function “normally”, it’s hard for us to comprehend why a person would commit the things these people have. I am not a psychologist and have no professional expertise on serial killers and why they do the things they do. I just have done a lot of research on them and go with information I have heard from actual psychologists.

There isn’t any one particular thing that will cause a person to become a serial killer. It takes a combination of a lot of factors for a person to get to that point but the most common have to do with abuse in their childhood, an injury to their head or an unfortunate chemistry in their brain they are born with that results in personality disorder.

Ted Bundy was someone who had a personality disorder. As you can see in the photo above he looked like an average guy. He honestly just looks like a guy you would see at the grocery store or someone you might work with. The thing about serial killers is they hide in plain sight. The idea that these people are just walking among us, that we come in contact with these people at any time, scares the crap out of me.

Ted Bundy was described as a guy who was good looking, charismatic, kind. Ann Rule, true crime novelist and who worked with Ted Bundy at a suicide hotline, said that he was very comforting to those who called in. He would even walk her to her car at night because of “dangerous people” out there. This man was, to sum it up, a sociopath. He would hide his true nature under a guise of kindness and likeability. The list of crimes he committed include:

This man was a literal snake in the grass. But he was able to get away with it for so long because no one would suspect someone like Bundy because he was just so helpful and nice. Ted bundy had a plethora of disorders including: bipolar disorder, anti-social personality disorder and multiple personality disorder.

When we think about a serial killer we tend to think this person would be weird or different, that there’s just something off about them. Those things may be true but you won’t see it unless you were to spend a lot of time with that person. There are people who have married or been involved with serial killers and have seen the oddities that come along with them. A lot of times though those personalities will attract similar personalities so sometimes the ‘quirks’ are written off. Sometimes, the partner may even help the killer with their endeavors.

Take these two for example, Paul Bernardo and Karla Homolka, known as the Ken and Barbie killers. These two were a killing duo. Karla would lure victims for Paul to rape and then they would murder the victims together. Their very first victim was Karla’s very own teenage sister. Paul had commented that he wanted to take the girl’s virginity so Karla decided to offer her to him as a birthday present. They got the girl drunk and he raped her. She started to come to right in the middle of being assaulted so to keep her quiet they covered her mouth and in doing so they accidentally suffocated her to death. They did all this with Karla’s parents just upstairs.

Sometimes it isn’t a spouse or significant other, sometimes it’s just another deranged mind.

These two guys are Roy Norris and Lawrence Bittaker, also known as the Toolbox Killers. Can you guess what they used to kill their victims with? These two met in prison. They exchanged stories of the things they’d done and it turned into a partnership. When they were both released they met up and began killing, raping and torturing five teenage girls in southern California in 1979. They used pliers, ice picks, sledgehammers and wire hangers to mutilate and strangle these girls.

Personality can play a big role in how a person thinks and perceives the world, but I believe it’s the way you treat people that will make or break a future serial killer. According to the Journal of Police and Criminal Psychology, 36% of serial killers were physically abused in their childhood, 26% were sexually abused and 50% were psychologically abused. These numbers are as close as they can get because most killers are liars and aren’t always the most reliable source.

This man is Gary Ridgeway, the Green River Killer. He killed close to a hundred women. In his childhood his mother was physically, emotionally and sexually abusive to him. She would shame him in front of his siblings when he would wet his bed by bathing him in front of them, mainly focusing on his private area. He was very confused and became attracted to his mother. His main victims were sex workers because they were such easy targets, no one would miss them. He has said,

Another killer who was abused as a child was John Wayne Gacy. His father would beat him with a belt, a broom handle and his own fists. He would belittle him and call him stupid or not good enough. John was always trying to prove himself to his father but he could never make him proud. His father would beat him and yell at him for absolutely no reason and called him a mama’s boy and that he’d grow up to be a queer. He indeed was a homosexual but had to hide it for fear that his father would hate him even more. John Gacy started to rape teenage boys. He would lure them to his house and force them to perform oral sex on him. He eventually started killing these boys after too many had told on him. He buried them under his house. They found 28 bodies in his crawl space. He was also diagnosed with anti-social personality disorder. 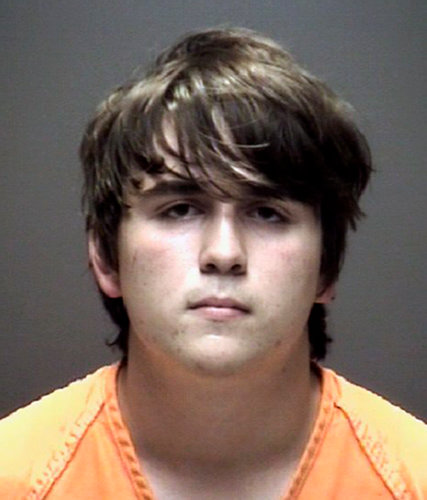 The newest, or should I say fastest growing type of serial killer: School shooter. This is Dimitrios Pagourtzis. Last May this young man walked into his school in Santa Fe, Texas with a .38 caliber revolver and killed ten people. Mass shootings are taking place more and more often in America. Yes mental illness may play a role but I honestly believe it has a lot more to do with bullying. They way a person is treated, in my opinion, is what would more likely cause a person to lash out and want to hurt others. Look at all those serial killers. They were all pushed off the edge by someone in their lives. They wanted to prove that no one was going to bully them anymore. That they would be the ones in control.

1 in 25 people are sociopaths. That could be one kid in each classroom across America. Imagine if that one kid is the kid that everyone picks on all day, every day.

Be Kind. It could save lives.

← Let’s Talk About AHS Apocalypse
Pumpkin Painting With the Fam →

5 Comments on “Be Careful How You Treat People”